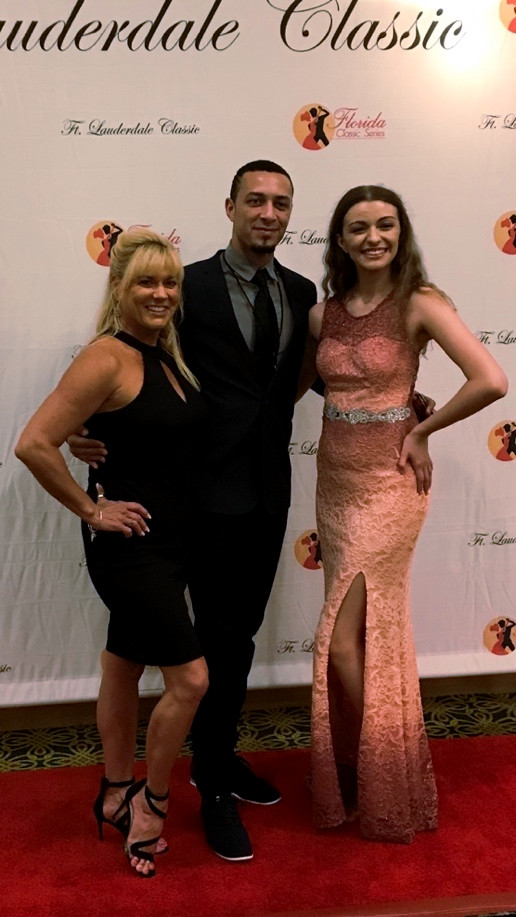 On June 9th, our very own Tara Langhorne and Tanya Shirer competed in the 10th Annual Ft. Lauderdale Classic competition with their instructor, Primo Garcia. Tara danced freestyles in American Smooth, and Tanya performed in American Rhythm. Both also competed in multi-dance contests in these divisions for prizes.

Tara and Primo entered the Pro/Am American Smooth Closed Challenge, where they performed Waltz, Tango, and Foxtrot. They were unopposed and took home 1st place. They also entered the Pro/Am American Smooth Closed Scholarship, in which they performed the Waltz, Tango, and Foxtrot in both a semi-final (against 10 other couples) and a final round (after recalling 7 couples). Even though this was Tara’s first competition in over a year, they won 1st place, receiving a cash prize.

Tanya and Primo entered the Pro/Am American Rhythm Closed Challenge, in which they performed Cha Cha, Rumba, and East Coast Swing against 5 other couples and placed 2nd. They also danced in the competitive Pro/Am American Rhythm Closed Scholarship, which had a semi-final (with 11 couples on the floor) and final round (with 6 couples being recalled). They also performed Cha Cha, Rumba, and ESC in this event, as well. She took home 2nd place again, also winning a cash prize.

Let’s give some cheers for Primo and his students, who represented Dancin’ Dance well in Ft. Lauderdale!